Self Learning - At Own Pace

Join NowSyllabus
(You can also select a particular Subject or Sub-Topic as per your choice to start with. Please sign-up and proceed. Selection of Subject and Sub-Topics will appear in Purchase section after Login. To sign-up, click here.)
Why ABHYAS?
Sign Up
Course Benefits
Interested in M&VP
Concept Detail
Maths / Ratio and Proportion / Ratio and Its Simplest Form
(A Brief Glimpse of ABHYAS Content - Have aLook !!!!)

Ratio and Its Simplest Form

A ratio is the relationship, or comparison, of one quantity to another. In  other words we can say that ratio indicates how many times one quantity is contained in the  another. quantity For example, if there are ten boys and seven girls  in a group of students, then the ratio of boys and girls is ten to seven. And the ratio of girls to boys is seven to ten.

To simplify a ratio means to reduce it to its smallest, simplest, terms.

Here we will learn how to make the ratio in simplest form.

1. A ratio between two quantities of same kind and in the same units is obtained on dividing one quantity by the other. Ratio does have units as it is being used to compare to quanties in the same units. The ratio is independent of the units used in the quantities compared.

2. The ratio must always be expressed in its simplest form or in its lowest terms.

Solution:  As the two quantities are in diffrent units we will first convert them so that they are in same units 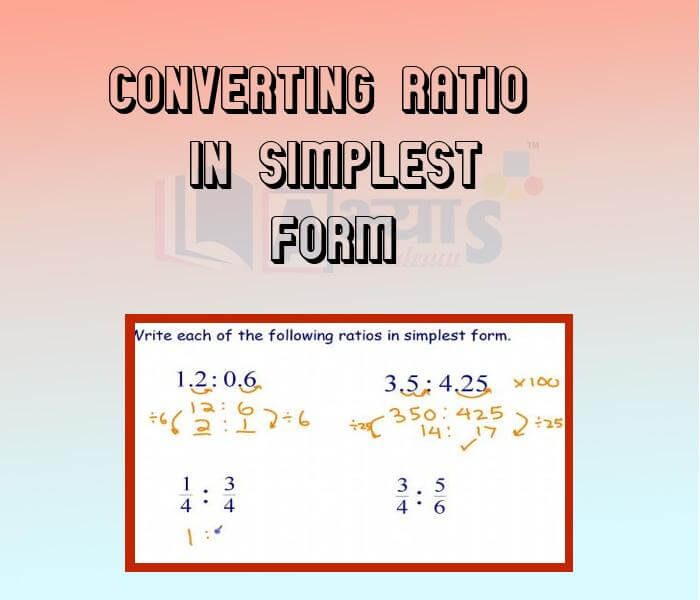 A Brief Look
Course Progress PANEL
Student can view their progress from this panel.
Self Study
Student can learn from Self Study panel. Concept notes and Video will appear their to learn concept. Exam will be held on the basis of concepts learn.
Exam Evaluation PANEL
Detailed Exam Analysis for Offline and online exams will be Available in Student dashboard. Offline exams will be held for in-campus students only.
Class Notes PANEL
Student can view / download Class Notes assigned to them. Request can also be sent for elapsed Notes.
REPORT CARD
Report Card of each student is visble in Student Panel for WISE-FA, WISE-PT, WISE-Testing, Written Exams, Attendance, etc.
STUDENT PANEL
Ranking amongst the students of the class are visible at any time. Students rank will automatically based on the exams given by the students and score.
SELF LEARNING PANEL
Self Learning panel to know topics/concepts read and exams given. Detail analysis provided to students for exams given. Remedial papers will be generated on student choice for Weak Concepts.
TEST GENERATOR
Test generator to generate test for concepts taught and pending.
STUDENT DASHBOARD
To know Online and Offline exams given / pending with graphical view.
Why ABHYAS?
Sign Up
Course Benefits
Want Help?

What describes you best?